Changing the Tastes of Minnesota since 1875

A culinary tour to the cuisines of Asia as they have appeared on Minnesota tables over the decades, the distinctive flavors of faraway homes with a midwestern twist.

It’s hard to believe there was a time when you couldn’t go out for Chinese food in Minnesota, but there was—until brothers and entrepreneurs Woo Yee Sing and Woo Du Sing opened their Canton restaurant (later called John’s place) in Minneapolis in 1883. Chinese, Japanese, Thai, Indian, and Cambodian immigrants have left an indelible and flavorful mark on our collective culinary history. Many cooks sought not only to make a living but also to preserve the memory of their homeland through the dishes set before family and patrons alike, to the great benefit of diners from the metro area to Duluth to the Red River Valley.

Asian Flavors includes interviews with pioneering chefs, features on beloved restaurants, stories of farmers and food businesses, and, of course, more than 150 treasured recipes that have nourished and inspired Minnesotans. Try Dar Cheen Chicken from Wing Ying Huie’s Chinese Lantern in Duluth, or Supenn Harrison’s egg rolls made famous at her state fair booth beginning in 1976, or Reiko Weston’s sukiyaki from the original Fuji Ya in Minneapolis. Let Asian food experts Phyllis Louise Harris and Raghavan Iyer take you on a tour through this comprehensive history, lavishly illustrated with historical and contemporary photography, from the Philippines to South Korea to Nepal, from the 1870s through today.

They are cofounders of Asian Culinary Arts Institutes in Minneapolis.

Watch the documentary on tpt.org.

Inspired by the book Asian Flavors: Changing the Tastes of Minnesota since 1875 by Phyllis Louise Harris with Raghavan Iyer, this thirty minute documentary celebrates Asian immigrants who have left an indelible and flavorful mark on Minnesota's culinary, cultural, and economic history. 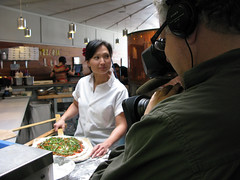 Food connects homes left behind with where we live today. Asian Flavors is the story of adventurous people who made the arduous journey halfway around the world to live in Minnesota, fleeing oppression and persecution or in search of jobs and education, and created new homes through food. Many cooks sought not only to make a living but also to preserve the memory of their homeland through the dishes set before family and patrons alike, to the great benefit of diners in the Twin Cities metro area.